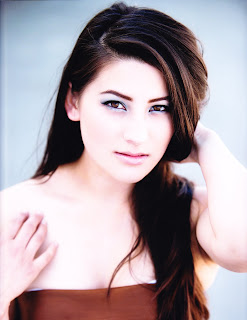 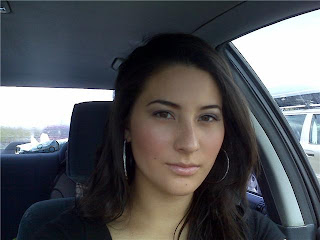 so i havent shown any photos of anything for a while, but i got a new one on wednesday when i showed up at aw for a photoshoot (which ended up being cancelled).  i had forgotten about this one, but i really like the blue eyeshadow. I think that with this photo ive also come to terms that i am not "pastey" but rather just fair skinned haha. also i did the womens conference on the weekend where we modeled makeup application on stage. i took a photo on my blackberry but it doesnt really do the makeup justice.  it was the "purple" look, i always end up being the one with the purple look because makeup artist always see the green in my eyes.

things that are coming up.. on the 16th i will be doing an aw makeup shoot in the morning, interviewing with calgaryfashion.ca in the afternoon and doing a photoshoot for my jackets in the evening.  oh ya because of shooting with ben last week he mentioned me to adrianna at calgary fashion who asked to do an interview with me about my show! so excited.  on the 20th we will start the morning off with casting call for my runway show (facebook invite here), then in the afternoon i will be shooting some group shots for an organization and then off to banff to celebrate my birthday!

ive also booked my first photoshoot in vancouver.. its the same day i arrive haha.

finally got some time to work in the studio, got some creditcard chip prints done, now need to finish some more prints so i can bring them to LA and do some sewing down there.